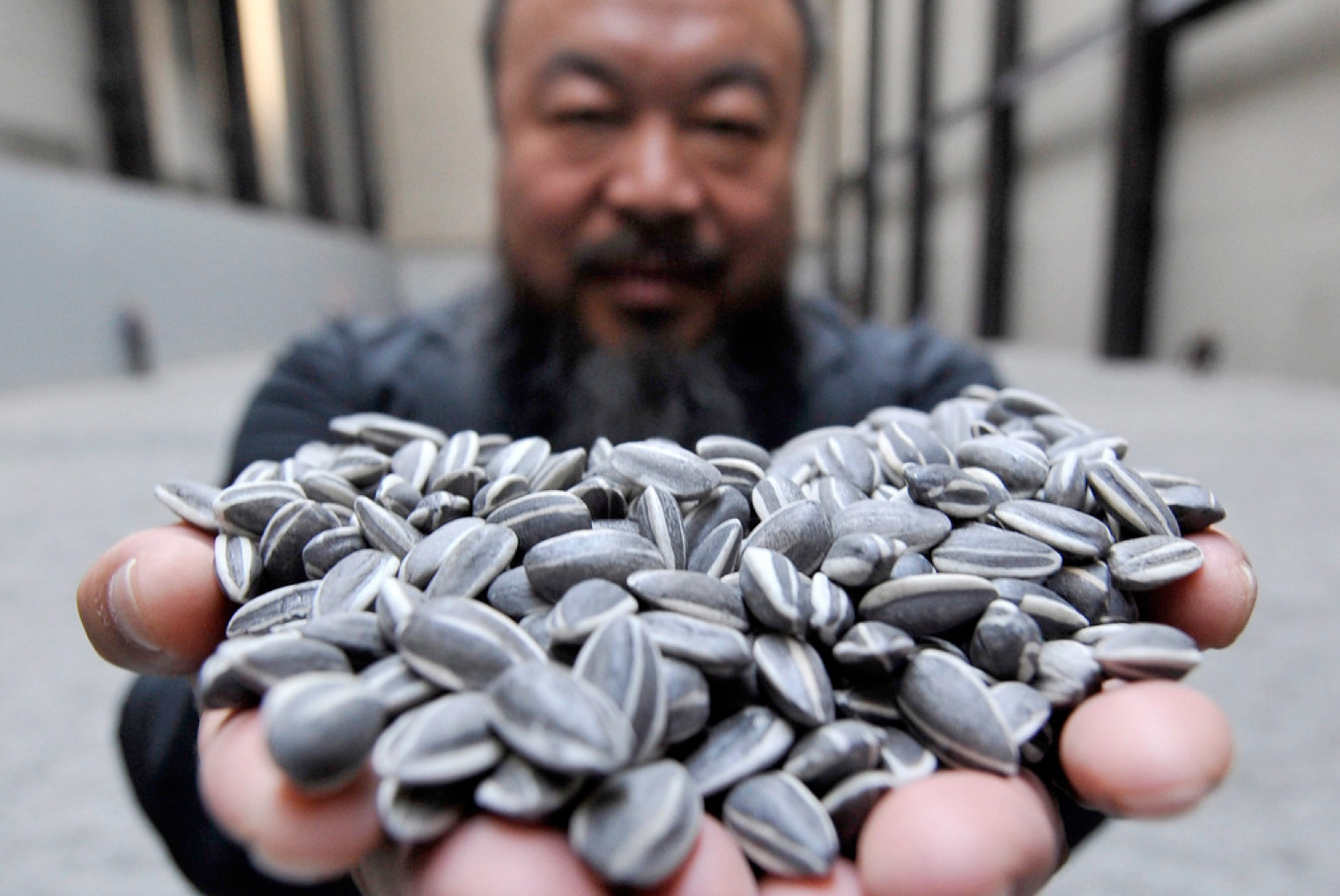 Non-linguistic artworks such as painting, installation, sculpture, etc., often use metaphor to somehow convey their meaning, and their cognitive and artistic effects. Consider Banksy’s small mural in Essex, consisting of five pigeons holding up signs reading ‘go back to Africa’, ‘migrants not welcome’, and ‘keep off our worms’ towards a colourful swallow. The work has been interpreted as a satirical metaphor, potently mocking the rise of anti-immigration sentiment in Britain today (Sinclair & Pringle, 2017: 32) (while the piece does use words, the metaphor itself isn’t linguistic). It represents UKIP and its sympathisers as pigeons, and migrant populations as swallows. 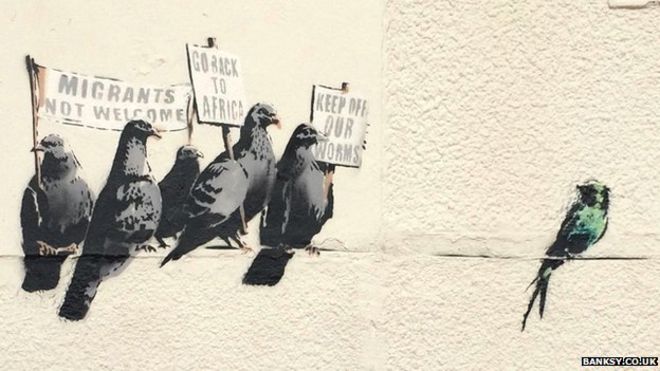 Metaphor is normally understood as a device “in which one thing is represented (or spoken of) as something else” (Camp & Reimer, 2008: 846). The device is analysed as an interaction between two types of domains: ‘source’ and ‘target’. For example, in the metaphor time is a river, features associated with rivers form a source, which are mapped on to the concept of time, which forms the target. This asks us to think of time in terms of rivers, or, UKIP sympathisers in terms of pigeons. The interaction between these two domains needn’t be linguistic – a person’s conceptual action of fusing the two domains could be prompted non-linguistically by images, sounds, and so on.

Philosophical analysis of metaphor in the non-linguistic arts has been biased towards what I call ‘aesthetic metaphors’, where the inputs for both the source and target domains are internal to the work of art, i.e. perceptual features of the work itself. That is, the source and target might be provided by the work entirely visually, sonically, and so on. Banksy’s pigeons are an aesthetic metaphor, for the source (pigeon) and target (UKIP) are both offered to the viewer by visual means – the pigeons are depicted as holding anti-immigration protest signs.

In a recent paper (currently under review) I unearth a neglected type of metaphor also used by the non-linguistic arts, which I call the ‘artistic metaphor’. An artistic metaphor is composed of an artwork’s internal content, but also its external content, which is provided by the work’s artistic properties such as its history, genre, artist intentions, and the cultural significance of any symbols used. Artistic properties are external to what we perceive in the work itself; they are not strictly perceived in the artwork in the way we experience its images, or sounds, and so on. But they still partly determine that work’s meaning and identity. In an artistic metaphor, one domain, usually the source, is detected perceptually in the work of art. The other domain, usually the target, is provided externally by the work’s artistic properties.

Consider Ai Weiwei’s Sunflower Seeds (2010). This was an installation consisting of millions of porcelain sunflower seeds, arranged in an enormous flat swathe in Tate Modern’s Turbine Hall, and originally invited viewer interaction (such as handling and walking on the seeds). The work has been interpreted as a metaphor for the Chinese populace under Mao Zedong’s rule. But it is not an aesthetic metaphor, because its fusion of the source and target domains is not entirely internal. For instance, there is no fusion of two images; this would be achieved if the seeds were actually constructed as tiny Chinese people. We just have millions of seeds. 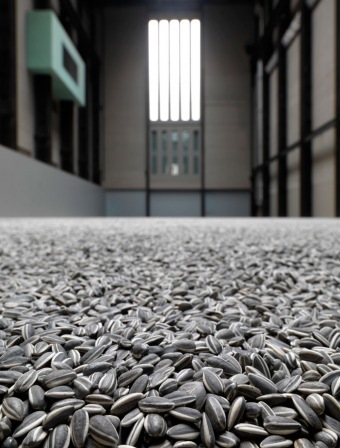 Rather, Sunflower Seeds is an artistic metaphor where the content of the target domain is not given straightforwardly by our perceptual experience of the art object. Here, the oppressed people under Mao and related themes constitute content given externally and aided by curation, and the ceramic seeds – the source – constitute content internal to the work itself. The use of metaphor here invites us to see the people ruled over by Mao as sunflower seeds, conveying messages about famine, individuality, and oppression. Moreover, the source domain has particularity: the installation has distinctive perceptual qualities given by the way Weiwei has crafted and displayed the seeds. This contributes qualities to be mapped on to our target domain. For example, the seeds have been painstakingly crafted one by one in a significant material – porcelain – which has deep historical roots with Jiangxi, China. This tactile and strong quality combines with the target domain, generating effective content about uniqueness and resilience under repression and poverty.

Identifying artistic metaphor has several benefits. In particular, it illuminates a potentially powerful tool to understand so-called ‘conceptual’ art, but also unearths a potential tension with how conceptual art is frequently understood. I’ll focus on the tension here.

Central to conceptual art is the supposed championing of the idea over the material, “[replacing] matters of the senses with those of the intellect” (Schellekens, 2007: 72). Different types of ideas have been the focus over the past century. For example, works from the Conceptual Art movement such as Robert Barry’s Inert Gas Series (1969) explored the nature of art itself. Other conceptual works since this period have explored wider philosophical notions, such as Michael Craig-Martin’s An Oak Tree (1973). And later conceptual works often consider socio-political themes (Schellekens, ibid), such as Adrian Piper’s The Probable Trust Registry: The Rules of the Game #1–3 (2013–17) and Weiwei’s Sunflower Seeds.

Conceptual art is often understood as being ‘dematerialised’ (Lippard, 1973) – any perceptual qualities a conceptual work might possess are supposedly demoted, where the ideas of the work are prioritised over the sensorial experience of the work. While analysed in different ways, the notion of dematerialisation still carries a lot of weight in conceptual art analysis. For example, Robert Hopkins argues that with conceptual art, “the conception is key”, and how it is executed is “largely irrelevant” (Hopkins, 2007: 58), where perceptual experience of the art object is not “the medium of appreciation because the artistic features appreciated do not enter experience in the way the notion of medium requires” (Hopkins, op. cit., 56).

Several, if not many, conceptual artworks use artistic metaphor: Sunflower Seeds is a paradigmatic example. But remember that the artistic metaphor assigns a crucial role to the source domain, and so with this, an indispensable role to sense experience when determining a work’s content and value. Perception of a work that uses artistic metaphor is more than a mere mode of access to the work. Rather, our perceptual experience of the work’s source domain is meant to permeate the work’s target domain; this is what metaphor is – it involves experiencing one thing in terms of another. And Sunflower Seeds is not suggesting that the generic type of object ‘seed’ is to be conceptualised as a particular society under oppressive rule. Rather, it is those specific seeds in the installation itself – which are arranged, crafted, and interacted with in a particular way – which provide the source features to be mapped on to the target concept. In other words, the sensorial features of Sunflower Seeds – its tiny porcelain sculptures – are a conduit for discovering its artistic metaphor.

Acknowledging the reality of artistic metaphors therefore seems in tension with the supposed dematerialisation of conceptual art. There are at least two options we could take to address this issue. We could bite the bullet and, for works that use artistic metaphor, assign their source domain features a dispensable or subservient role to the overall ideas conveyed by the metaphor. Or, we could question the idea that in conceptual art the material is nearly always dominated by its ideas.

I’m tempted to opt for this second option, and ask that we take another look at the way that many conceptual artworks use their material and perceptual content. The sensorial experience of many conceptual artworks which use perceptual aspects in their composition is probably integral to understanding and appreciating the artwork. Perhaps the notion of dematerialisation needs to be analysed in a way that leaves more room for conceptual works that use their medium in a way which is central to their full appreciation.

(Watch a video about the production of Ai Weiwei's Sunflower Seeds)

Daisy Dixon is a Research Fellow in Philosophy and Art at Peterhouse (Cambridge), and a practising artist.