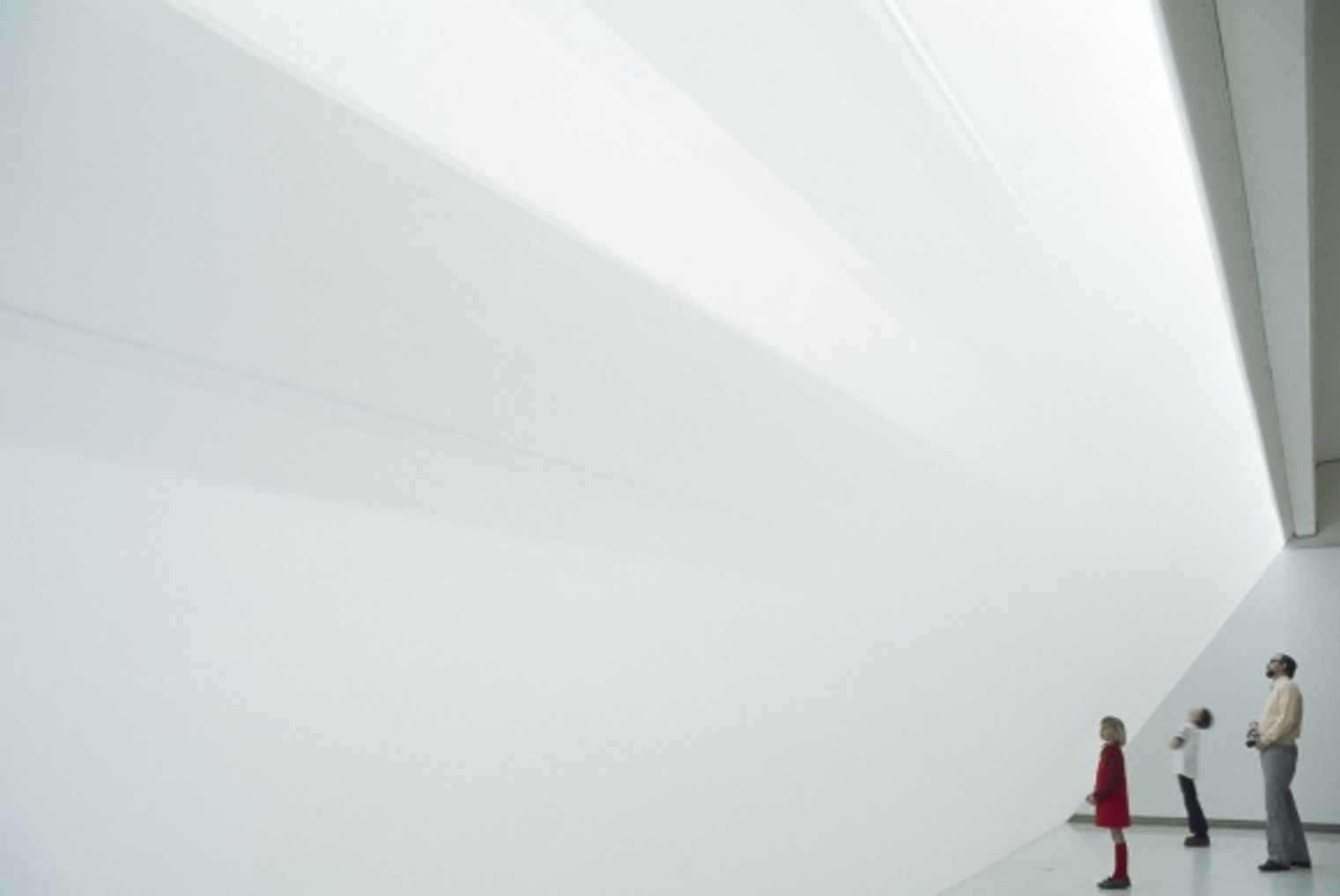 The interactive character of installation art

Works of installation art are structured around the beholders, who are invited to explore their spaces and the objects possibly placed within those (see e.g. Reiss 1999; Rebentisch 2003; Bishop 2005; Ring Petersen 2015).

Think of Robert Irwin's Untitled (1971). The work is displayed by hanging a rectangular, transparent cloth from the ceiling of an empty gallery room and anchoring it to the floor, to keep it stretched and wrinkleless. The cloth hangs obliquely – its lower rim is closer to the back wall of the room than its upper rim – and is as wide as the back wall: the beholders cannot reach the back wall, but they can get close to the cloth, which creates a space with a very sloping roof. The cloth is illuminated with fluorescent lights and its image is reflected by the polished, uniform gallery floor: as a consequence, when the beholders get closer to the cloth, they have the visual experience of entering into a luminous prism. The gallery floor, walls and ceiling are integral to the display of Irwin's work, which is a simple, luminous space that the public is invited to enter and explore. 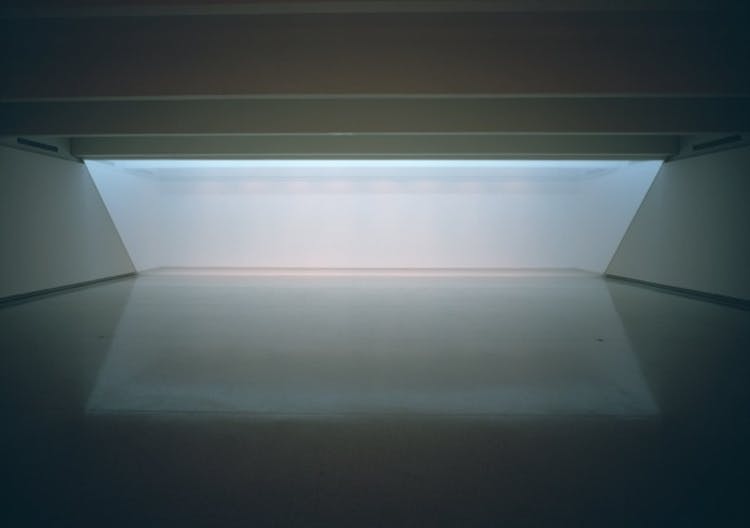 Think, also, of Yayoi Kusama's The Obliteration Room (2002), a much more complexly structured work which, at the beginning of its exhibition, shows an entirely white apartment, complete with white furniture. Here, the public is confronted with an articulated space and is invited to cover, or better yet, obliterate it with brightly coloured stickers, so that the apartment gets more and more colourful over the course of the work's exhibition.

Irwin's and Kusama's works show that installation art can prompt the public to engage in various sets of actions. The actions prompted by Untitled are rather basic: one is invited to enter its empty space, walk, sit down, or perhaps even crawl, and undergo the visual experience aroused by the fluorescent lights. By contrast, the actions prompted by The Obliteration Room are more complex: one is invited to enter a furnished space and to put stickers over every available surface. Are works of installation art interactive?

First, according to Gaut, interactive works are types whose instances are tokens, i.e. they are multiply instantiable works (2010: 141). If, with Sherri Irvin (2013; 2020 forthcoming), we argue that works of installation art, like other contemporary works of art, are non-physical historical individuals susceptible of having multiple occurrences (unless they have essential enduring physical components, in which case they are hybrid historical individuals with both physical and non-physical elements), then we can conclude that works of installation art are, too, multiply instantiable works. According to this view, any new exhibition of Untitled, for instance, is a new occurrence of the work (more on this below).

Second, Gaut (2010: 141) argues that only those among the audience's actions that are authorized by the work's author contribute to producing tokens of an interactive work. This, too, is in line with Irvin's views of contemporary artworks – including works of installation art – (see 2020 forthcoming): she argues that various works of contemporary art are governed, among other things, by rules for participation, which establish what kinds of actions the public is allowed to perform when interacting with them. Kusama's work, for instance, allows the public to put stickers around the room but not to, say, draw on its walls.

Finally, according to Gaut, interactive artworks are “types of which their interaction-instances are tokens” (Gaut 2010: 141), which means that the audience of those works contributes to producing their tokens (by performing authorized actions). Is this condition, too, satisfied by works of installation art?

Irvin does not discuss the hypothesis that the public participate into the instantiation of the displays of works of installation art, focussing instead exclusively on the role that art institutions play in producing the works’ displays. It seems, then, that according to Irvin the displays of e.g. The Obliteration Room are those produced by art institution teams whenever the work is exhibited.

An alternative view, according to which works of installation art fit entirely Gaut's understanding of interactive art, is the following: art institution teams produce partial displays of works of installation art whenever the works are exhibited, while the works’ public completes the displays by interacting with them in the way sanctioned by the artists through the works’ rules for participation. In particular, display completion happens whenever a member of the public interacts with one of the partial displays of a work in the way sanctioned by the artist. Each partial display, then, can prompt the making of many complete displays.

To this proposal one could object that while it is evident that the public modifies the display of The Obliteration Room by putting stickers around the room, those who enter Untitled leave no trace of their actions and therefore don't seem to contribute to the production of the work's displays and properly interact with it. This objection, however, relies on a narrow understanding of what counts as the display of a work of installation art, which is not faithful to the practice of installation art.

Let's consider again Irwin's and Kusama's works. To appreciate both it is crucial that we focus, among other things, on some of the qualities of the experiences they arouse in us.Untitled‘s goal has been described as the exploration of “how phenomena are perceived and altered by consciousness” and Irwin's activity as “in effect orchestrating the act of perception” (Irwin, Slant/Light/Volume; see also Irwin 1985). Bishop writes about Irwin (as well as other ‘West coast’ artists like James Turrell): “The phrase ‘light and space’ was coined to characterise the predilection of these artists for empty interiors in which the viewer's perception of contingent sensory phenomena (sunlight, sound, temperature) became the content of the work” (Bishop 2005: 56, my italics).

As for Kusama, in her early years she used to experience hallucinations, some of which of polka dots, and she has produced a significant body of work about self-obliteration (e.g. Dots Obsession, 1998) where she appears covered in polka dots to blend in a similarly looking environment (see Turner 1999). The Obliteration Room, then, can be described as orchestrating for the public an experience similar to those had by the artist.

This text is a slightly modified excerpt from my essay “On Experiencing Installation Art”, forthcoming on The Journal of Aesthetics and Art Criticism.

Elisa Caldarola is a Research Fellow at the Philosophy Division of the FISPPA Department of the University of Padova, Italy, and Principal Investigator for the research project “A Philosophy of Art Installation” (2018-2020).